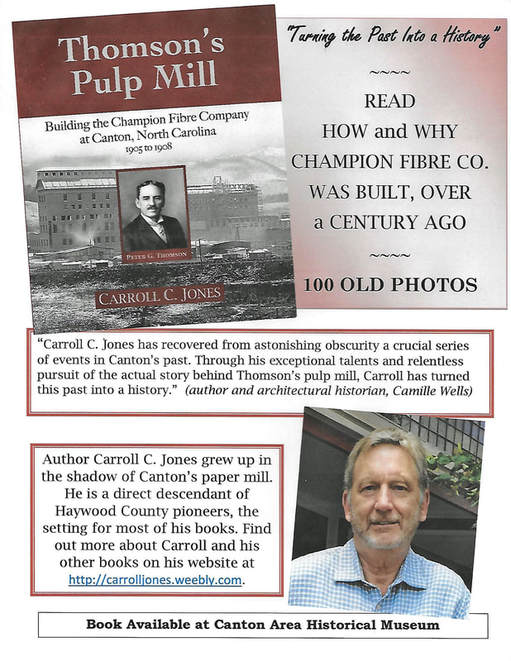 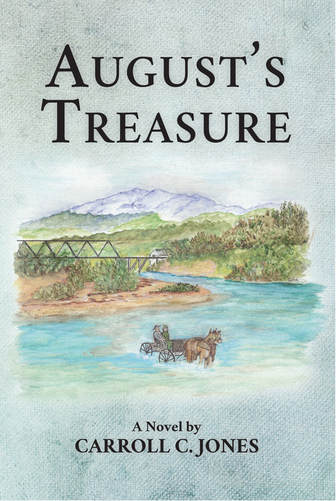 Local author Carroll C. Jones has recently received another prestigious History Book Award from the North Carolina Society of Historians (NCSH). This one is for his latest historical novel, August’s Treasure, the third book in the East Fork Trilogy. His first two historical fiction works were Master of the East Fork and Rebel Rousers, both of which garnered awards from the NCSH.

Noted North Carolina historian and author Larry Griffin wrote in the foreword to August’s Treasure that “it is through the alchemy of science and art that historical novels are written. To be believable, the author has to breathe life into characters whose fiction has a factual underpinning. To write that combination can be a daunting task; however, it is one at which Carroll Jones excels.”

All three award-winning novels that comprise the East Fork Trilogy are filled with tales of characters living in Haywood County’s East Fork River Valley before, during, and after the American Civil War. August’s Treasure picks up in the early 1880’s just as the railroad has penetrated the mountains to reach the small village of Pigeon River.

Almost at once, the youthful main character named August Hargrove is subjected to a life-altering experience. A horrible incident along the railroad he is building forces him to flee to the West to save his young neck. August is afforded opportunities to ply the icy waters of the Mississippi River in a steamboat, ride the rails to California on a speeding transcontinental train, mine for gold in a boom town called Skidaddle, and eventually start a logging operation high up on the Pigeon River’s east fork tributary.

It is a rich legacy that August leaves behind for later Hargrove generations to contemplate. When an old treasure map falls into Great-Grandson Clint Hargrove’s lap, so to speak, he sets out with his friend, Claire Shook, to unravel some of the Hargrove family secrets. Along the way, they explore the depths of their own feelings for each other and Clint struggles to excise a personal demon.

When asked about this latest book and where his inspiration came from, Carroll’s eyes lit up as he explained. “My boyhood memories of sitting in Aunt Nannie’s farmhouse kitchen and holding a canning jar filled with a golden-grained substance is still as plain as day to me. Being just a boy, I reckoned it was gold since my grandfather Hargrove supposedly spent more than twenty years out West consumed with the gold fever.

“It was never clear to me why he actually left the western North Carolina mountains when just a young man, and for more than twenty years thereafter pursued his hard-rock mining passion in Montana, Nevada, and finally Skidoo, California. So left with no reasonable explanations, I invented this fanciful story that might explain such a hasty exodus from the Carolina highlands to the Wild West.”

Carroll C. Jones was born and raised in the mountains of Haywood County, North Carolina, in the small paper-mill town of Canton. He is currently wrapping up his seventh book, which will be titled Thomson’s Pulp Mill: Building Canton’s Champion Fibre Company, 1905—1908. It is an historical non-fiction work, which will offer a concise and illustrated account of the construction of Peter Gibson Thomson’s mammoth pulp mill in Canton, North Carolina. His great-grandfather helped build the mill, his parents worked there, and it provided the foundation for his own professional career. Thomson’s Pulp Mill is expected to be released in the early spring of 2018.

Signed copies of all of Carroll’s books are available at Blue Ridge Books. They can also be found online at Amazon.com and Barnes and Noble, or in electronic format through Kindle and Nook.
​ 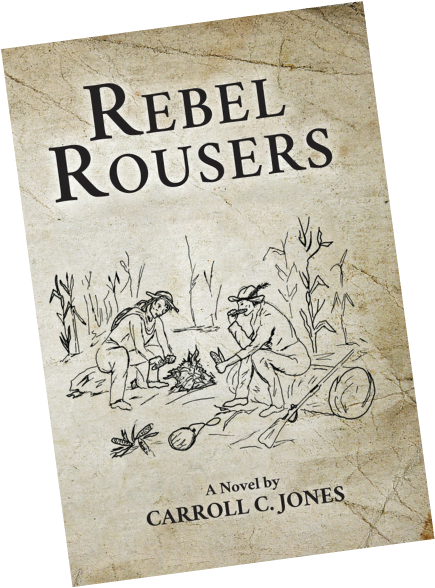 NEWS FLASH
The North Carolina Society of Historians has recently awarded Carroll C. Jones a 2016 History Book Award and the prestigious President's Award for his novel Rebel Rousers. It was deemed the President's personal choice out of all entries and more than 150 awards presented in 2016!

Rebel Rousers—an historical fiction novel set during the American Civil War—tells the coming-of-age tale of a youthful Rebel soldier who hails from the western North Carolina highlands. At once the strapping lad has to bear-up under his romantic longings for the miller’s daughter, the hateful acts of an antagonist named Bugg, numerous personal tragedies, and the terrible trials of war. Will he and his best buddy survive the war? What about the girl? Best you pick-up a copy of Rebel Rousers and find out.

Noted western North Carolina writer Kathy Nanney Ross says in her foreword, “Carroll Jones blends unique story-telling and crafty writing with historical facts and regional lifestyles to create a superb, thought-provoking novel, Rebel Rousers. His book reminds us how the lines between joy and sorrow, good and evil, and justice and vengeance can blur. As a good historical novel should, Rebel Rousers transports us back in time and teaches us about our past without sacrificing a compelling story. Enjoy.”

Recently awarded the Clark Cox Historical Fiction Award for 2015 by the N.C. Society of Historians, Carroll C. Jones’ Master of the East Fork earned high praise from the judges, including: “After reading the novel, one realizes that not only have they been entertained, they have been educated. The reader becomes lost in the story in the sense that, through reader-friendly text, scenes begin to form in the mind’s eye due to vivid descriptions of beautiful scenery, the characters involved, and daily life.” 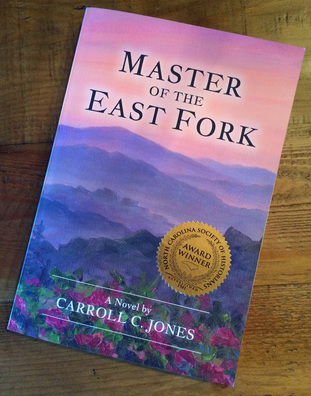 ​Master of the East Fork received the prestigious Clark Cox Historical Fiction Award from the N.C. Society of Historians--Oct. 17, 2015.

From judges' collective comments:
“…Characters come alive under the author’s creative pen, and the reader becomes familiar with their lives, lifestyles, personal feelings and beliefs, lingo and personalities in a very short while.”

“After reading the novel, one realizes that not only have they been entertained, they have been educated. The reader becomes lost in the story in the sense that, through reader-friendly text, scenes begin to form in the mind’s eye due to vivid descriptions of beautiful scenery, the characters involved, and daily life.”

“This is an emotional novel so get ready to enter the roller coaster for a ride of ups and downs, many ‘curves’ and straightaways!”

“From cover to cover this book is wonderful! We look forward to many more stories from this author in the future.”

﻿Below you can see the original artwork selected for the Master of the East Fork book cover. It is an original painting by Asheville artist, Jeff Pittman. 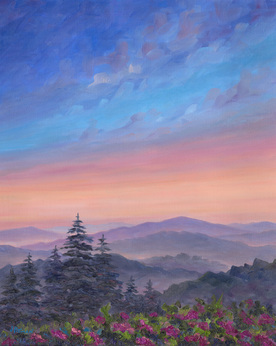 Cold Mountain looms in the distance beneath a brilliant dusky sky.

In the foreground blooming rhododendron huddle

around the magnificent towering balsams.
﻿
Powered by